As the dust settles on this year’s NBA Trade Deadline, there’s one thing we know for certain: the Celtics are a better team than they were yesterday. 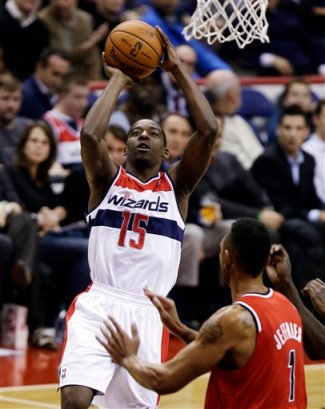 Right around 2 pm eastern, an hour before the deadline, The Celtics swung a deal with the Washington Wizards to acquire third-year guard Jordan Crawford. In exchange for the talented young scorer, Boston sent the expiring contract of veteran C Jason Collins as well as the expiring contract of injured guard Leandro Barbosa to Washington. Rookie C Fab Melo was originally thought to be included in the trade, but Washington ultimately decided it wanted the cap space trading Crawford and acquiring Collins’ expiring contract would provide.

Crawford is in the third year of his 4 year, $5.5 million rookie contract, and will be a restricted free agent when his contract expires following the 2014 season, meaning the Celtics can match any offer another team makes and retain Crawford should they choose to do so at that time. Crawford also has a club option in 2014 for just over $3 million.

With the emergence of rookie phenom Bradley Beal in Washington at the shooting guard position, Crawford became expendable.

Disappointed with the team’s decision, Crawford had been relegated to bench duties for the past few weeks and wasn’t seeing much court time.

The former 27th overall pick has averaged 14.5 points per game in his career. This season, he is averaging 13.7 points and 3.5 assists. Crawford is most notably remembered for a monstrous 2009 dunk on LeBron James at a Nike camp that Nike reportedly didn’t want to get out. Several reporters’ tapes were confiscated, per the request of James according to people at the game. Some video did leak out though. Check it out below, right at about :34 seconds:

What does this mean for the Celtics?

Well, Crawford is a terrific scorer whose talent allows him to score in bunches, nearly at will. He’s shot 43% from the field this season and provides excellent depth for the Celtics bench, as well as at the guard position where they were a bit depleted following torn ACLs for both starting point guard Rajon Rondo and Barbosa. He’s also a cheap, team controlled, young scoring guard who is a nice piece for any rebuilding efforts the Celtics make, as well as a nice contributor for this team as they attempt to make another deep playoff run.

With Avery Bradley and Courtney Lee the starting guards, you have to think Crawford’s duties will be on the second team with Jason Terry. If Crawford excels and impresses coach Doc Rivers, he’ll earn more playing time. For now though I can’t see him getting an overwhelming share of the minutes. He’s nice depth, especially if anyone gets into foul trouble or injured, but this trade probably opens up more playing time for someone else…

Okay, so maybe I like this guy way more than I should, but Fab Melo has the raw potential to be the future defensive face

of this franchise. He isn’t terrible offensively, and has terrific defensive instincts. The guy is a legitimate 7-footer who looks more imposing on the court than anyone else when he’s out there. He’s listed at 7′ even, but I’d give him a few inches, for sure. He also set an NBA D-League Record with 14 blocks in a game, which ohbytheway he recorded a triple-double in. Then, in his next game, he had 32 points, 9 rebounds, and 9 blocks – something only 3 players ever accomplished at the NBA level. He’s averaging 11 points, 6.8 rebounds, and an astounding 3.4 blocks per game.

The point in this Melo gushing? He will very likely slide into the minutes left open by Collins, something that can only make him a better player under Kevin Garnett’s tutelage. Am I excited? HAH. What an understatement.

Of course, this could be a preemptive strike to signing a veteran forward like Kenyon Martin, essentially an older version of Josh Smith, who is rumored to be drawing interest from Miami after they traded reserve C Dexter Pittman to Memphis.

You decide: Was this a good trade for the Celtics? Vote below!

Pat in the Twitterverse

Error: Twitter did not respond. Please wait a few minutes and refresh this page.