Never thought I’d be okay with anyone else but Nomar wearing #5 for the Red Sox. Enter Gomes.

This time last year, if I had told you the Red Sox would lead Major League Baseball in wins (tied with the Braves at 70) and would be there largely in part of Jonny Gomes, you’d have laughed at me. Most so-called “experts” wrote off the Red Sox in their MLB Preview columns (I’m looking at you, Sports Illustrated) and had them finishing 4th (Hey, ESPN) with no shot at the Wild Card, let alone the Division and the best record in the majors. Yet on August 8th, if the season ended today, the Red Sox would have home-field advantage throughout all three rounds of the playoffs, should they advance that far.

Tonight, trailing 5-2 in the 7th inning, Jonny Gomes came to the plate and smashed a 2-run homer to bring the Red Sox within 1 run. Stephen Drew would smash a 3-run bomb in the top of the ninth (right after Gomes patiently drew a walk off of Houston closer Josh Fields, a former Red Sox prospect taken by Houston in the Rule 5 Draft last season) to put the Red Sox on top for good before Koji Uehara would strike out the side in the bottom half of the inning for the win.

How huge has Jonny Gomes been for the Sox this season? He went beast mode last night, hitting his 4th pinch hit home run 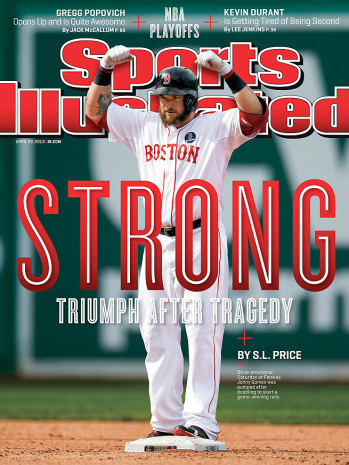 of the season, two of which were walkoffs earlier in the season. He’s made several terrific plays in the outfield, including a few diving plays and an unassisted double play last week against the Diamondbacks. Probably most importantly though is what he brings to the clubhouse: a fun-loving, hard-working, gritty dirtdog. He’s a modern day Trot Nixon, in a reserve player’s role. You want fun, he brings it. Excitement? Watch the reactions of his teammates every time they’re shown in the dugout. Spark plug? See the picture above. Veteran Presence? How about 70 wins, 11 walkoffs, and 4 come-from-behind wins 8 days into August, including the last two against Houston and a thrilling 6-run rally in the ninth last week against Seattle? Gomes played a role in all of them.

When asked what it felt like to be the hero, he nearly rolled his eyes as the question rolled off his shoulder.

The Red Sox are relevant again, and he’s a big reason why. While this is definitely Dustin Pedroia’s team and he wold wear the “C” were it played on ice, Jonny Gomes almost certainly deserves an “A” of his own.

Pat in the Twitterverse

Error: Twitter did not respond. Please wait a few minutes and refresh this page.